He Gives Voice to the Absolute 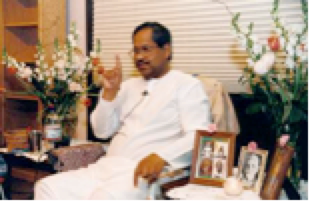 He Gives Voice to the Absolute

In June, Sweden was visited for the first time by Dr. Vijai Shankar, who came here to speak about enlightenment for three evenings at Haelsans Hus in Stockholm. Dr. Shankar was born in India, has lived in England and is residing in the United States since few years. He was previously active as a scientist, but nowadays he dedicates his time solely to receiving seekers in his modest home in a garage apartment in Galveston, Texas. Interest for what he has to teach has increased and funds have been gathered so that he can have ashram with better facilities to receive people.

Dr. Shankar imparts advaita, the Indian teaching that all is one (advaita means "not-two".) He doesn't teach any meditation technique, being content with just speaking. He holds satsang, sanskrit for "meeting in Truth." A satsang with Dr. Shankar, like the ones in the evenings at Haelsans Hus, consists of him speaking on enlightenment and answering questions. The answers build on the questions, so that he step by step leads the audience to new insights. The seeker met Dr. Shankar for an interview and started by asking what enlightenment entails.

"Enlightenment can be described in many ways. One is to say that enlightenment is to transcend, go beyond, all the opposites of life. There are no more opposites. They appear instead as different sides of the same coin, like for instance good and bad, night and day.", Dr. Shankar replied, and continued: "Enlightenment is also knowing that there is no time or space. The enlightened one doesn't experience peace, he is peace. He is everything. And he doesn't think, because the thought process has ended. He has no needs. Thoughts and actions only come when they pertain to what he has to perform. Thoughts are hell. A mind without thoughts is heaven!"

Dr. Shankar also gave his explanation for why all gurus say different things about enlightenment and indicate different paths. "It is as if you're looking at a plant, no leaves are identical. In the same way all things are unique and every enlightened soul is unique." But why should a regular person strive for enlightenment? "There are no regular people, only divine souls having a human experience.", he explained. "If one is satisfied with life there is no reason for self-investigation, because then you're already enlightened! If one is not satisfied, if one suffers from the opposites, then it is necessary with self-enquiry to reach enlightenment. But if one is satisfied living with all the opposites, it is beautiful so!"

"All people will reach enlightenment in due time. The human being can be likened to a seed that is predestined to become a full tree. Eventually one will want to get away from misery and suffering. Those who seek enlightenment in this lifetime have already been "cooked" by suffering in previous lifetimes."

If this is predestined, one can wonder if everything is predestined - do we humans really have our own free will, or is that an illusion? "It is difficult to explain the theory of relativity to a ten year old child! To the mind, which perceives everything from the material, you have a free will, and should choose to do good rather than bad. From an Absolute* viewpoint, the way an enlightened looks at it, one has no free will. One knows one's will only when the act has been performed." Speaking on the purpose of creation, Dr. Shankar says it is an illusion: "One can say that it is a play created for the I not to get bored. There is one actor and many roles. The I plays all these roles, but is at the same time the audience that sits inactive and watches the play, without participating."

It is a peculiar experience to meet Dr. Shankar. He walks supported by his Indian-English female assistant Kalpna Dave. It feels like meeting an empty body. But soon the body fills with energy and Dr. Shankar comes forth. It is as if he were in a daze and slowly comes to life. There's more precision in the movements, the gestures become sweeping, the speech sharp and humoristic. After a couple of hours of activity he seems to get tired. Dr. Shankar says one has to go through suffering before one can become enlightened. It is also told that he himself went through a crisis before he reached samadhi (absorption into the Absolute.) When he had reached that state, Kalpna Dave had to take care of him and his physical needs for a certain period, until he returned to the world. "It requires a lot of courage to become enlightened, and few reach samadhi. Few return fully from this state.", Dr. Shankar said during his satsang in Stockholm. "When you return from samadhi, you do not know that you have a changed personality. You feel light. It is a magnanimous journey to return, and it takes years to get used to it. On the way back one experiences how Creation is built. That is how the Indian seers have received the knowledge that exists in the Indian tradition.", Dr. Shankar said.

It is a very different experience to listen to Dr. Shankar - he is not like the rest of us. It is evident that he gives voice to the Absolute when he speaks. He who really longs for enlightenment, is bound to have a good opportunity to be satisfied by listening to him.

*The Absolute refers to Brahman, the Universal I or Pure Consciousness, the eternal foundation of life in Indian philosophy.

back to articles page